Surge Protector or Power Strip for your projector? 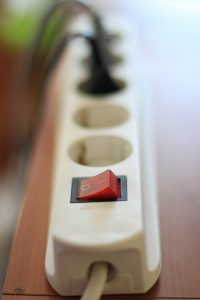 Protect your projector from power failures 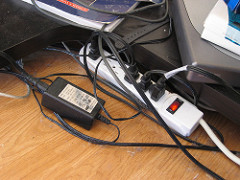 The power strip or power bar is a simple block of electrical sockets attached to a flexible cable. You plug it into a single electrical wall and immediately have more outlets to plug in a variety of devices. Very handy but power strips won’t stop power spikes from ripping through your electronics. Some power strips have small circuit breakers to interrupt electricity in case of an overload but they can’t offer full protection.
While a surge protector may resemble a power strip and work in the same manner, it does offer more protection. Inside are series of metal-oxide varistors (MOVs) that take the electrical hit rather than your projector. A surge protector with a healthy supply of MOVs regulates the voltage by either blocking or grounding excess voltage while also preventing electrical surges coming from a wall outlet. It’s definitely a great investment.

What to look for 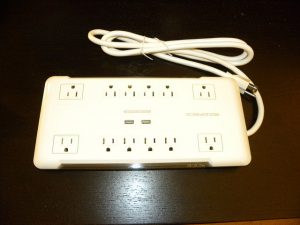 
Surge protectors are not that much more expensive that an ordinary power bar and do a great job of preventing damages to your projector. The average price is between $10 and $20 — slightly more than what you would pay for a power bar. A good rule of thumb is to always buy slightly more outlets that what you need. This way you can add future gear to the protector and resist the urge to daisy chain plug one on top of another.
There are three parts to consider while buying your surge protector:

Ignore the claims that some manufacturers put on surge protectors claiming to “condition” the power from the wall to improve performance. Most projectors already have this function installed in their hardware.

Surge protectors don’t last forever. They will eventually wear out like all consumable electronic goods. Look for a protector with the red indicator light that shows all the protective MOVs and other components are in good working condition. If you do experience a big power surge, then chances are the MOVs will stop functioning. An indicator light lets you know when your MOVs are done and it’s time to buy a new surge protector.
Surge protectors are a great investment to protect the life of your projector. Read more about the best surge protectors on the market from The Wirecutter’s consumer test.